Delegation is the practice of giving a person or group the authority and responsibility to perform specific activities on behalf of another. The act of delegation does not transfer accountability and the person who has delegated the work remains accountable for its results.

The goals of delegation are to:

In many ways, delegating a work package or task is a microcosm of the wider P3 environment. There are many shared principles as illustrated in the procedure below: 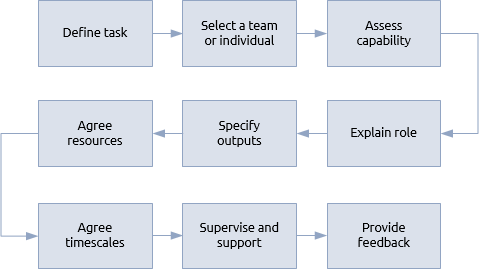 The first step is to define the task or work package and confirm that it is something that can be delegated. A team or individual can then be selected but their capability to do the work should be assessed and any training needs identified.

The transfer of the work will clearly require the manager to specify what needs to be done, but it is not only the production work that is being delegated. Some degree of responsibility and authority is also being transferred, so the manager must explain the role as well as the outputs.

At this point, In P3 terms, the delegating manager has simply provided the scope of the work. The next two steps cover discussions about the resources needed and the required timescales for delivery.

Once the work is underway, the manager should exercise a suitable degree of supervision and provide support as required.

Feedback is useful throughout the procedure but is shown at the end where the feedback on the end result is delivered.

Delegation is primarily a means of distributing work around the various P3 contributors, but it is also a means of motivating teams and individuals to realise their full potential.  Delegation underpins a style of management that encourages project team members to use and develop their skills and knowledge.

There are numerous potential obstacles in the path of effective delegation, including:

Delegation is an essential component of developing high-performing teams and a competent P3 manager will need to develop skills to overcome all these personal and organisational obstacles.

The principles of delegation are at the heart of any project, programme or portfolio method.

In organisation management the different managerial levels are defined along with the flow of delegation. On a small non-complex project this may only extend to a sponsor, a manager and a delivery team. As size and complexity increase, so do the levels within the organisation.

One of the effects of this is that people become both delegators and delegatees. A programme manager may receive delegated authority from the programme sponsor but then acts as the sponsor of projects – and delegates to project managers accordingly.

Anyone who is a link in this chain must consider carefully what can and cannot be delegated. This is why the first step in the delegation procedure refers to the need to confirm that the task is “something that can be delegated”. A simple example of this is where the sponsor will delegate the preparation of a business case to the manager but cannot delegate the authority to approve the business case.

The Praxis processes reflect the principles and procedure of delegation in many ways. The simplest example being the relationship between the development process and the delivery process.

An important element of delegation in the P3 environment is the effect of changes to objectives and delivery plans. While a task may be defined and delegated it is inter-related to many other tasks within a project, programme or portfolio, and therefore subject to change.

Everyone within the P3 environment should expect change. What will counter the beneficial effects of delegation is uncontrolled change. At project level change control will address changes to scope and at portfolio level the co-ordination process will communicate the effects of links between delegated parcels of work.

At all levels of complexity between these two extremes, the delegator must keep the delegatee informed. That means explaining the reasons for change in the delegated work as well as the changes to the work itself.