Projects and programmes often have to deal with complexity. This may be because the objectives of the work are complex and/or because the work is operating in a complex environment. Understanding that complexity is vital for the success of the project or programme.

A causal loop diagram is a tool used to describe a complex system. It is usually described in the context of Systems Thinking.

Humans have evolved to well understand simple cause and effect. If I touch a flame it will cause pain, so I don’t touch flames.

As a result of understanding this simple cause and effect, I’m able to avoid the pain of being burnt.

In other situations, the relationships are often two way. For example, if the balance in a bank account earns interest and the interest is added to the balance, the result is more interest, and so on.

In a causal loop diagram. This relationship is shown in this way:

Another simple example is that of a thermostat. 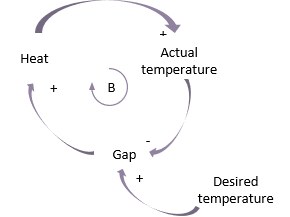 The effect is that the system strives to reach the goal of the desired temperature. It is referred to as a ‘balancing loop’ and is indicated by the ‘B’ symbol.

It’s useful to understand the behaviour of these systems over time:

As part of systems thinking, causal loop diagrams are useful as the extent and uncertainty of scope increases.

While causal loop diagrams are useful in complicated projects and programmes, they really come into their own in complex situations where cause and effect are difficult to understand. This would be particularly true in programmes of business change.
The next example starts with a situation that can be complicated but not initially complex.

Conversely, as population increases, deaths increase. As death increases, then population decreases (these move in opposite directions). This is a balancing loop.

These delays are shown by short parallel lines on the corresponding arrows. In the diagram below, the delays have been added and the two loops have been brought together.

Of course, human populations cannot be understood by this simple combination of births and deaths. There are many other factors at play. 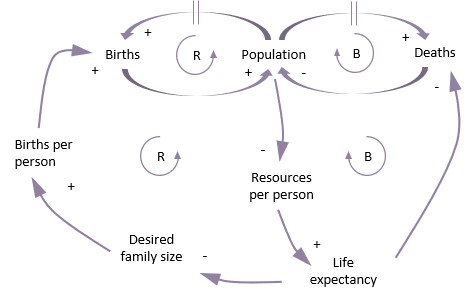 For example, as populations increase in a developing economy, they may have access to fewer resources per person (food, jobs, health care etc.). This has an impact on life expectancy and desired family size. These factors loop round into the original two birth and death factors that affect population. They create another reinforcing loop and another balancing loop.

These examples constitute a brief introduction to causal loop diagrams. As part of systems thinking, they can be used to model complex systems. This may be the system that is an outcome of a project or programme, or it may be the organisational system that is in place to deliver the objectives.