Abraham Maslow proposed his hierarchy of needs in 19431. The theory has been widely accepted and quoted even though Maslow never did any empirical research to support it.

The hierarchy shows a progression of motivational factors. It starts at basic human survival and progress to higher intellectual needs. The hierarchy starts with basic physiological needs such as food, water, oxygen, exercise.  It then progresses through another four levels culminating with self-actualisation which is about satisfying yourself that you have fulfilled your potential. As each of these needs is satisfied it ceases to become a motivator. 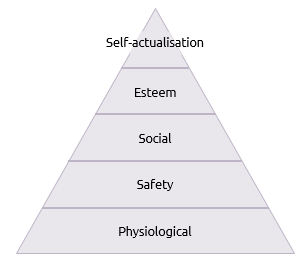 Only needs that have yet to be satisfied are motivational but as with all models of human behaviour, this initial theory is sound, generally true, but simplistic. Maslow himself identified a number of exceptions:

In P3 Management terms the levels could be interpreted as: