Robert Cialdini set out his ‘six principles of influence’ in his book ‘Influence: the Psychology of Persuasion’ 1.  He identified these by observing the behaviours of people in sales, advertising, fund raising etc. to see how these experienced professionals influenced their target audience. 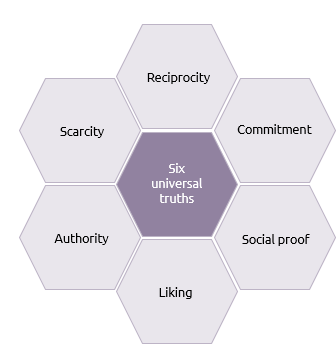 Influencing is a key skill for both P3 managers and sponsors. The ‘assess’ step in the stakeholder management procedure will identify key stakeholders who have the potential to impact the work. The P3 manager and sponsor usually do not have authority over these stakeholders and must use influencing skills to gain support for the work.

Of course, influencing is not limited to stakeholders. Managers who aspire to McGregor theory Y will use influencing skills to develop their team, especially as it reaches the higher levels of models such as Tuckman and Katzenbach and Smith.

One of the downsides of Cialdini’s universal truths is that they can sound manipulative, like the most aggressive salesperson you have ever met. While it is important to be able to influence it is also important to act professionally and ethically.

Many of Cialdini’s truths are embodied in Cohen and Bradford’s model.