In the 1993 book ‘The Wisdom of Teams1, Jon Katzenbach and Douglas Smith define a team as:

The book contains two important models. The first relates to ‘team basics’, which must be applied rigorously to overcome the barriers that prevent the relationships required in what they term a ‘real team’.

The team basics are shown as a triangle in which the vertices indicate the things that teams deliver. 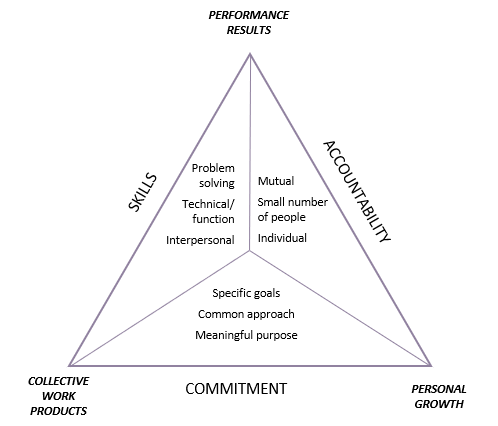 The sides of the triangle and the three internal triangles describe the elements and behaviours that enable the deliverables. For example; having a common approach and meaningful goals encourage commitment in the team members and that commitment, in turn, supports the collective work products and personal growth.

A later quotation from Jon Katzenbach explains how he believes that acting on these behaviours is far more important to improving the performance of the team than team-building.

The second model is the ‘Team performance curve’, as shown below:

The content of ‘The Wisdom of Teams’ was developed from extensive first hand observation by the authors of how teams work in many organisations. The principles they established were practical and drawn from real experience (not specifically in project and programme teams, but all teams). A list of the teams observed is actually contained in an Appendix of the book.

The principles are applicable to all contexts. In the project and programme environment, that means it doesn’t matter whether the context is simple or complex, highly agile or more predictive, the same principles still apply.