The DISC model is used by Team Praxis, which helps team members and stakeholders understand each other's different perspectives on the components of project, programme and portfolio management.

DISC is a public domain model of human behaviour developed by William Moulton Marston and described in his 1928 book ‘The Emotions of Normal People’. It is based on the work of Carl Gustav Jung who created a ground-breaking model for human behaviour in his 1921 book, Psychological Types. Jung recognized that people can be divided into four main styles. Marston’s work built upon Jung’s and named the four main behavioural styles, D, I, S and C.

His work focused on psychological phenomena that could be both observed and measured. He focused on the way the individual perceives their environment and the way they react to that perception. 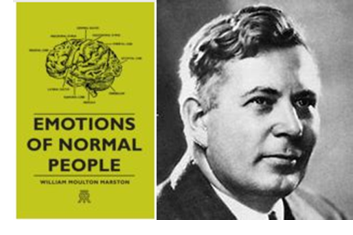 In the original work, the environment is classed as either favourable or antagonistic and the individual’s typical response as either passive or active. When presented as axes, these reveal four primary types of behaviour

A simple underlying distinction of the four types based on the two axes is that:

Marston himself never created an assessment instrument based on the DISC model. Walter V. Clarke, an industrial psychologist, was the first person to create such an instrument (personality profile test) using Marston's theory.

Since 1928, the model has evolved considerably and a plethora of proprietary assessment tools developed. DISC is now, arguably, the most common psychometric profiling tool in use today. Some tools explicitly reference DISC but even those which do not still have its underlying structure at their core.

The character traits are now more generally referred to as Dominant, Influential, Steady and Conscientious – clearly retaining the DISC acronym.

The two axes are described in many ways in modern versions of DISC. The diagram below brings typical terminology together and shows how the four behaviours relate to the axes. 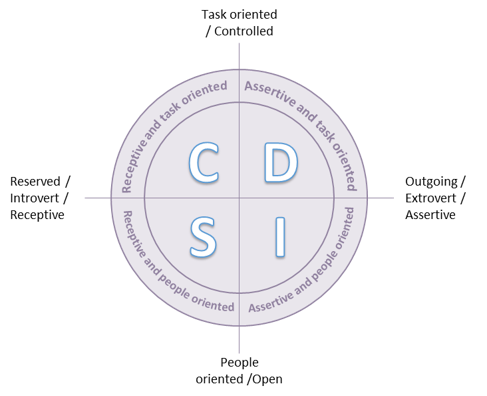 Current approaches to the DISC model invariably colour code the four quadrants as Red, Yellow, Blue and Green. The attribution of colours to the four behaviours is not consistent so when moving between products it is always wise to focus on the letters D, I, S, C (when used), rather than the colours.

It is important to note that people do not fit entirely into one quadrant or another. At different times and in different circumstances, we can all exhibit all four behaviours but it is most likely that one will be strongly preferred and more common than the others.

The issue for many P3M teams is that people with different behavioural preferences will perceive and implement the processes and techniques in different ways. Naturally, we all tend to think that people will look at a plan or a situation and see it in the same way that we do. That is not the case.

Members of a project or programme team need to understand how colleagues and stakeholders will perceive even the fundamentals of P3 management in different ways.

In doing so individuals will become more productive, gain from the diversity within the team and reduce conflict in turn leading to better outcomes.