An example of value analysis

Brooke Bicycles uses value management as part of each project to develop a new bike. After breaking the bike down into component parts a matrix is prepared to show how each component contributes to four basic functions of a bicycle: 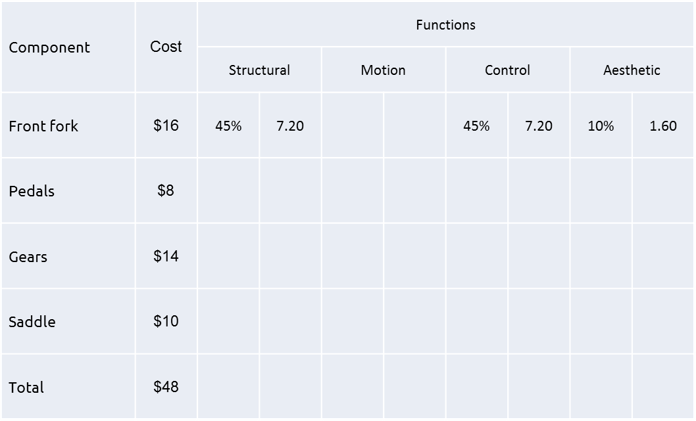 For the first component, 'Front fork', I have estimated that 45% of its function is structural, 45% is for control and 10% is to look good. The percentages have been multiplied by the total cost of $16 to give a cost per function.

In our suggested completed matrix our percentages will differ. This doesn't matter, the point is that (if all the components are included) you can see how much we are spending on each function that the bike performs. 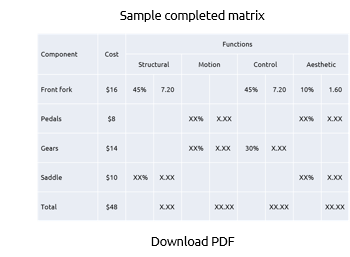 Another benefit is that we can check whether the money spent within each function and component is balanced.

For example, if we were spending a lot of money on state of the art gears but were buying cheap, out of date saddles and pedals you would question why.

In a product as small as a bicycle, any imbalances and inter-relationships would be fairly obvious from the start, but if the project was large enough to involve a diverse team and multiple products, value analysis has a very useful co-ordination role to play.

It is wise to avoid making the matrix too large, so on larger products, pareto analysis is often used to prioritise the analysis on elements that are most worthy of attention.

An example of value analysis