In his book ‘The Five Dysfunctions of a Team’, Patrick Lencioni1 explains the five potential dysfunctions on a team and what a leader can do to address them.

The five dysfunctions are: 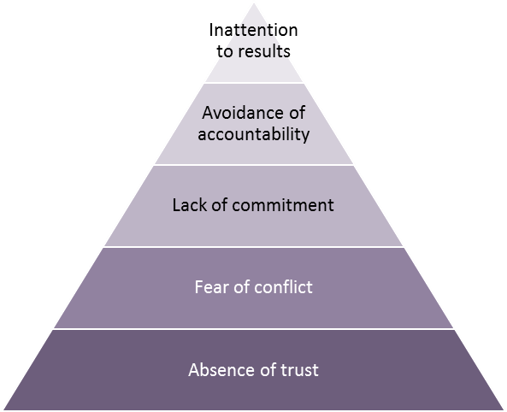 Lencioni says that the role of the leader here is to “Go first!” which fits well with a collaborative approach to determining the objectives of the project and means of achieving them. The leader should readily admit where they need help themselves and engender trust in others by enabling everyone to contribute based on their strengths and encouraging them to seek help to address their weaknesses.

This dysfunction is an interesting alternative to the ‘storming’ stage in the Tuckman model of team development. Whereas Tuckman suggests that all teams go through a period of conflict, Lencioni points out that if team members are lacking in trust they will not engage in robust debate.

The role of the leader here is to “Mine for conflict” through skilled facilitation of the process to establish objectives and how to achieve them.

If the fear of conflict is not addressed poor decision are made which results in ambiguity and lack of commitment. Particularly competent team members can become disgruntled. The leader has to force clarity and closure of issues, which again is all part of the identification and definition processes, particularly through exercises around requirements management and solutions development.

When there is no commitment to a plan of action, Lencioni points out that even the most focused and driven individuals hesitate to point out problems and behaviours that are counterproductive. Everything that the model highlights to this point have emphasised the benefits of going through the project management processes and functional procedures in a collaborative manner and confronting difficult issues.

In fact Lencioni’s ‘team’ in the project context should involve stakeholders as well as the project management and delivery teams.

Ultimately, if the team leader (project or programme manager in our case) has not addressed the earlier dysfunctions, the end result will be that individuals will put their own needs before the collective goals of the team. This element could be said to be particularly relevant to stakeholders who don’t have the sort of accountability that is normally applied to the members of the management and development teams.

Lencioni’s dysfunctions and the role of the leader in addressing these can be summarised as shown below. 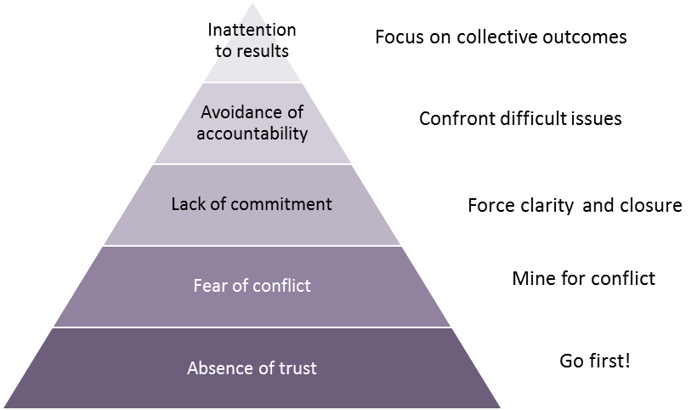