Risk events may be classed as threats or opportunities. In each case there are four possible responses to a risk event. 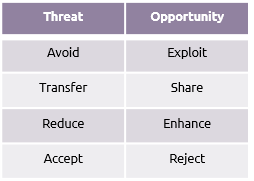 The choice of response will be influenced by a probability/impact assessment.