The payback method is one of the simplest forms of investment appraisal. It is most suited to projects of lower complexity in contexts where liquidity is important. The method is easy to apply and simple to communicate to stakeholders.

A retail chain is refurbishing an existing property and wants to know what the impact on cash flow will be. It estimates the refurbishment costs and net income from the new store.

If the income and expenditure are shown on a graph it is clear that the payback period is just over three and a half years. If company policy is to achieve payback in four years then the project passes the test; if company policy is payback within three years, it doesn’t. 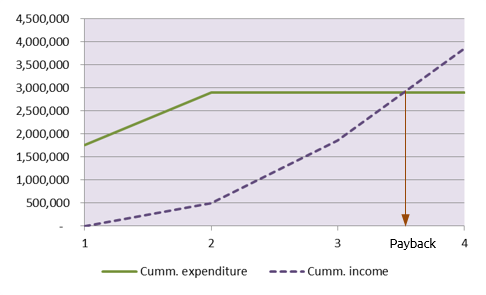 The exact payback period can be calculated with the formula:

Payback can also be used to assess the ‘do nothing’ option required by a business case.

A company is considering a project to replace an existing computer system that costs £2,000 a year to maintain and £1,000 a year to operate.

A replacement package will cost £6,000 and implementation costs will be £2,000. Maintenance will be £250 per annum and operating costs £500 per annum.

The two cash flows are shown below:

Continuing with the current system is the ‘do nothing’ option and if these are shown on a graph it is clear that the project to implement a new package will payback in just over three months.

This approach could also be used as part of a make or buy decision where the comparison is between the purchase of a proprietary package as opposed to the development of a new package in-house. 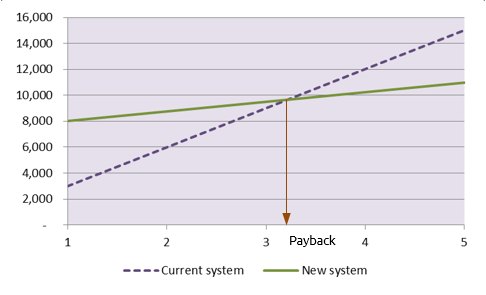 The key factor that is ignored by the payback method is how the value of money changes over time, i.e. in an economy that has price inflation; the value of money earned today is different to the same amount earned in five years’ time. This is taken into account in the more sophisticated discounted cash flow methods.