Kanban is a Japanese word that can be literally translated as signboard or billboard. In the 1950s Taiichi Ohno at Toyota developed a production control system using cards that provide a visual signal to trigger an action.

Originally, this was used to maintain high levels of efficiency in production lines and for the implementation of ‘Just in Time’ (JIT) production.

Over the years the term has been used in a variety of ways but it is useful to think of a kanban card as being a physical card containing information about a product and how it should be developed; a kanban board is where the kanban cards are displayed according to their progress through the development process and the overall technique is simply referred to as kanban.

In recent years, kanban has found a role in agile project management, particularly where the work is executed using the scrum approach.

A kanban board shows the flow from a product specification in the backlog, through development and testing to the completed product. This highly interactive and visual approach, coupled with the daily scrum meeting and relatively short timeboxes (sprints), is a more appropriate way to track the flow of work than traditional methods such as Gantt charts. 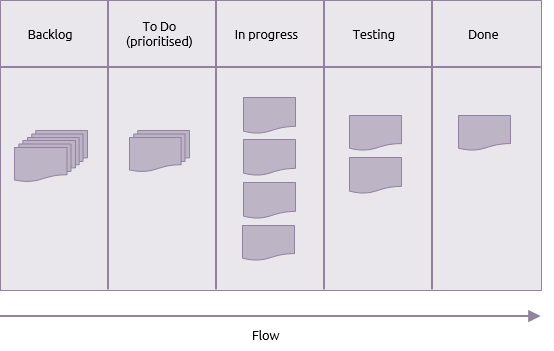 The diagram above shows how a product may pass through five stages. Kanban does not specify the number of stages nor what they are called. This should be defined according to the needs of the work being done.

The actual board can be electronic or simply ‘post-it’ notes on a whiteboard.

Taiichi Ohno stated that kanban must follow strict rules in order to be effective, such as:

These rules were originally developed for scheduling products in the lean manufacturing and JIT environments. They need to be adapted for different project management contexts but the principle of clear rules still applies.