The Stacey Matrix1 was developed and published by Ralph Douglas Stacey. It is designed to help understand the factors that contribute to complexity and choose the best management actions to address different degrees of complexity. It was not specifically designed to address project delivery but is just as relevant to that area as any other.

The basis of the matrix is two dimensions: agreement and certainty. 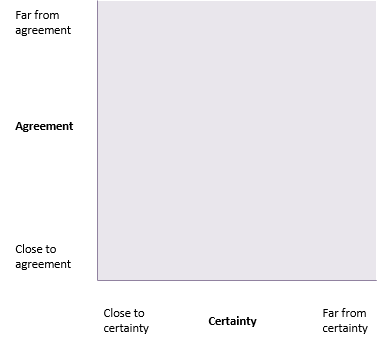 Projects are close to certainty when cause and effect relationships are well known and similar projects have been performed in the past. It is then usually possible to extrapolate from past experience to predict the outcome of a new project. Techniques such as parametric and analogous estimating depend upon this information.

Projects that are far from certainty are required to deliver something that is new and innovative (or at least new to the host organisation performing the project). Often, cause and effect relationships are unclear. Past experience is of little help when trying to plan.

Members of a group, team or organisation will have differing views on the objectives of the project and how to achieve them. The governance, management style and approach to managing the project will depend upon the level of agreement.

1. Close to agreement, close to certainty

2. Far from agreement, close to certainty

3. Close to agreement, far from certainty

4. The zone of complexity

5. Far from agreement, far from certainty

The Stacey matrix has a lot on common with other complexity-based models. For example, a project in Zone 1 is arguably the same as a Type A project in the WHOW model. Similarly, Zone 2 projects in this model are similar to Type B and so on.

Another related framework is the Cynefin Framework which helps understand the way to respond to circumstances around simple, complicated, complex and chaotic circumstances. How these four areas relate to the Stacey Matrix is shown below: 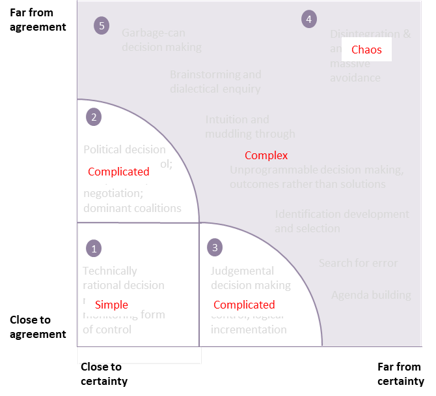