Having recently suffered a week of extreme temperatures and sleepless nights in Melbourne, with more to come, everyone is aware of some of the effects of sleep deprivation including short tempers, the loss of concentration and the reduction in some fine motor skills. In short, tired people are more grumpy, absent minded and clumsy than normal and new research suggests that they are more likely to cheat!

The underlying cause is the same; the lack of sleep reduces the amount of glucose in the prefrontal cortex and only adequate amounts of sleep can restore it. Physiologically, self-control occurs largely in the pre-frontal cortex region of the human brain, and uses glucose as a fuel. The act of implementing self-control draws upon this fuel, and can eventually exhaust the fuel causing one’s ability to exert self-control to reduce. And when self-control is depleted, people are more likely to cave in to temptations to behave badly or unethically. Start with the fuel in short supply due to lack of sleep and self-control dissipates sooner.

This has important business and team management implications. Ethics are central to the ‘good governance’  of an organisation and an important management concern; ethical behaviour will boost the reputation and performance of the organisation, whereas unethical behaviours can damage it significantly. And lack of sleep affects everyone, not just ‘bad’ people. Whilst it is common view that good people do good things and bad people do bad things, the behavioural ethics literature indicates that this is simply not the case; everyone has the capacity for both ethical and unethical behaviour and the balance is affected by how tired they are. 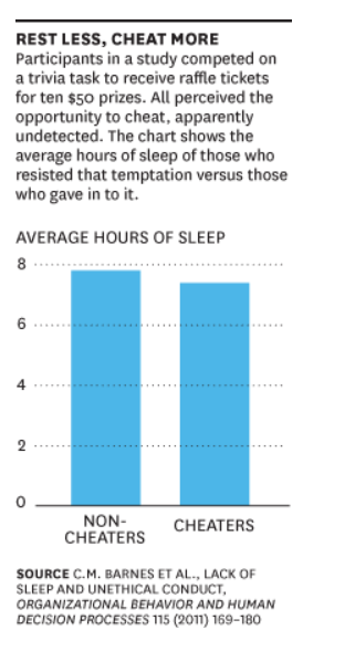 In one of their laboratory studies there was a difference of only about 22 minutes of sleep between those who cheated and those who did not.

In their field studies, they found naturally occurring variation in sleep (with most nights ranging from 6.5-8.5 hours of sleep) was sufficient to predict unethical behaviour at work the next day.

Executives and managers should keep this in mind – the more they push employees to work late, come to the office early, and use their smartphones to answer emails and calls at all hours, the more they invite unethical behaviour to creep in.

Ethics is defined as ‘doing the right thing even when no-one is looking!’ Particularly the small things needed to ensure a job is done properly and necessary procedures followed, and it only needs one check or test to be omitted or short-cut at the wrong time to open the potential for a crisis.

Smartphones are as bad as a heatwave!! They are almost perfectly designed to disrupt sleep by keeping us mentally engaged with work late into the evening.

The problems caused by using these phones late at night include:

One solution suggested by Harvard Professor Leslie Perlow, is improved ‘sleep hygiene’. Sleep hygiene refers to the pattern of behaviours associated with sleep. There are patterns of behaviour that are conducive to sleep, and other patterns that make it much more difficult. With some relatively simple steps, you can improve your own sleep hygiene, making it easier to fall asleep and stay asleep:

By following these steps, you can improve your sleep hygiene which will make it easier to fall asleep and stay asleep, Good sleep hygiene is not a fix-all panacea, but the research data indicates that is will certainly help.

And because leaders help to set norms by modelling behaviours, my recommendation is to prioritise sleep in your own life, while encouraging your team to do the same. Do what you can to support employees’ sleep health rather than disrupt it. The better rested we all are, the more effective we will be at work supported by more ethical and considerate behaviours.

These ideas can help with office induced disruptions to sleep. Now all we need is a way to avoid the next heatwave.