Conflict, what an opportunity

It is not news to suggest that projects and project management are full of conflicts. Conflicts about requirements, resources, progress and success are plentiful. Conflicts with sponsors, team members and stakeholders need to be resolved, or at least managed, in a way that protects the project and preserves relationships. In reality the project manager cannot avoid conflict; yet it seems that many practitioners are less than confident in their ability to turn inevitable conflict into opportunity for the team, project and to ensure wider organisational effectiveness.

So let’s start with some definitions and perspectives from outside of project management. Standard dictionary definitions of the word conflict reflect the ‘struggle’ and ‘clash’ between opposing forces. All conflicts have the potential to become negative, debilitating, relationship destroying occurrences.

Research into conflict and peace studies assumes that whilst conflicts are the expression of opposing interests, and are characteristic and endemic of modern society, the conflict is resolved when some mutually compatible set of actions is worked out (Source: M.Nicholson: Rationality and the Analysis of International Conflict. 1992:11). There are undoubtedly times in the management of projects where it is not optimal to try to find a resolution to a conflict; focused on mutual agreement or a way forward between the parties.

Sometimes it is better to “lose the battle in an attempt to win the war”, other times it may be appropriate to 'force' your own objectives over-riding the other parties’ wants and needs. It is widely accepted that a situational approach to managing project conflicts is needed, as suggested by models such as the Thomas Kilmann Conflict Mode Instrument. 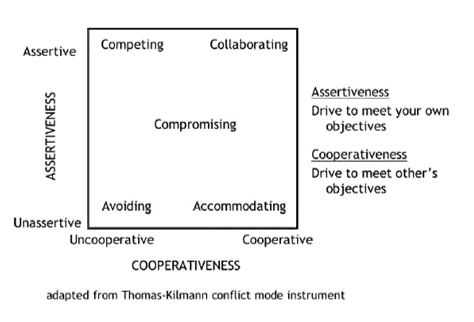 This Lucid Thought however wants to pick up on a further aspect of conflict management that our recent experiences have highlighted; this is about the role of the individual project manager in conflict situations.

Using a model from Transactional Analysis to illustrate our point, the Drama Triangle as coined by Stephen Karpman, it is easy for project managers to fall into one of the following roles: 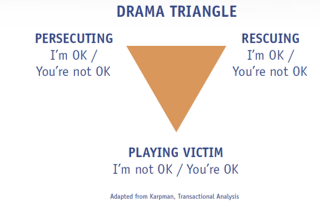 As project manager you are managing a six-month duration, fixed price contract with a new and important client. The contract was hard won by the sales rep. who won the business from the competition with the client driving a very ‘hard bargain’. Two months in the project is two weeks behind schedule due to a few unforeseen problems, but actual costs are on track to make the projected 20% margin. You are working closely with the engineers to recover, although your senior engineering lead thinks that sales were totally optimistic in their promises to the client.

You have just returned to the office from a client meeting where the client sponsor gave you a hard time for non-performance so far. You have to resolve the confl ict with the client and your internal colleagues in engineering and sales.

In addressing the conflict, do you adopt the role of the 'persecutor' - blaming the sales rep for agreeing the original contract? Is it better to adopt the role as 'victim' - poor project manager being squeezed by the client, the engineering team and sales team all at once, or is it best to be the friendly 'rescuer' - trying to stop the sales and engineering teams battling with one-another?

Put in these terms we’re sure that most people reading this are denying that they would ever adopt any of these three potentially dysfunctional roles - yet we know we all do from time to time. Worse still is the tendency of some PMs we have encountered to abdicate their responsibility for resolving the conflict, instead escalating the problem to the sponsor or some other senior manager as an 'issue'.

Is there another way? Yes.

The skilled conflict resolver knows how to be “hard on the issue yet soft on the person” - to focus on finding a way forward without blaming but also avoiding taking all the problems on their own shoulders. Key skills are being assertive (not aggressive or passive) and having the facilitation skills to find common ground and a willingness to resolve the underlying tensions.

Finally, we’d like to consider the links between effective risk management and conflicts on projects. All too often our risk identification (threats and opportunities) focuses on those uncertain events that would have a direct impact on time, cost and quality objectives. Yet there are many risk events that have serious potential to damage or enhance stakeholder relationships that we perhaps miss because their impact isn’t obviously measurable in TCQ terms. It is these unmanaged stakeholder risks that create conflicts - we could view them as people based issues?

So, back to the title of the Lucid Thought - how can conflict be an opportunity? If we can identify and manage those risks that would have a detrimental effect on stakeholder relationships if left unmanaged, we can create incremental benefit for the project and our wider organisations by anticipating conflict and intervening early to ‘nip it in the bud’.

If the chance of conflict has not been foreseen and managed our skills as assertive facilitators can ensure that potentially damaging conflict, with entrenched ‘roles’ of persecutor/victim/ rescuer being played out, is turned into a creative conversation where relationships are strengthened and solutions are co-created.

That’s got to be good for everyone.

Conflict, what an opportunity