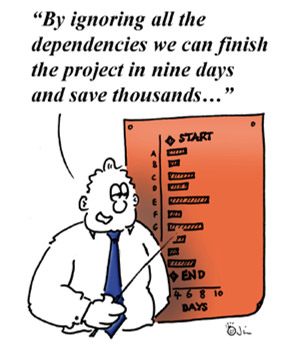 Over the last seven years we have written three Lucid Thoughts directly relating to the topic of scheduling. These have had the titles “Reviving the ancient art of scheduling”; “Do you know which activities have free float?” and “What makes a good and usable schedule?” All of these have in some way criticised what we see as common scheduling practice and emphasised how textbook practice can really improve project performance.

In the first of these Lucid Thoughts written seven years ago, we said: “Today, due to the very nature of available computer software, it is no longer necessary to follow anything like the old sequential (planning) process. In the extreme case a project schedule is created by, first establishing the desired end date; importing activity descriptions from a predetermined template and then literally drawing bars to represent elapsed time ensuring that the end date is not exceeded. In truth this is nothing more than a pretty picture that was created without any thought to the project scope and without any consideration of the logical dependencies between activities. Unfortunately the final result is all too often regarded as perfectly acceptable and a realistic representation of the project schedule something prepared by a computer can’t be wrong!! Who looks behind the façade of the ‘pretty’ Gantt chart?”

When Ivan Lloyd heralded the arrival of Microsoft Project 2010 in Project Manager Today magazine, he hailed one of its new features; the ability to carry out “manual scheduling that ignores traditional critical path analysis and allows users to merely input data as and when they have it”. It would appear that a dream has come true for many: the ability to draw a schedule without the need to identify and input predecessors and successors, leads and lags etc. Hallelujah!

Ironically we first heard this practitioner desire for pictures rather than schedules 20 years ago when a project manager said that the graphical software package Lotus Freelance (now superseded by Microsoft PowerPoint) was by far the best scheduling tool. The reason why he said this was because all he wanted to do was to draw the bars of a Gantt chart without any need to join up the logic and see the impact of task and resource dependencies on the schedule.

Another interesting statement in Ivan’s article is “Microsoft Project’s biggest competitor has always been Excel”. Some of you reading this article may be thinking this doesn’t make sense; surely Project and Excel are not comparable pieces of software? We might have said the same however we have often been amazed what lengths some project managers will go to in order to avoid using scheduling tools. We work with one company where project managers have programmed macros in Excel to carry out critical path analysis.

Why bother? if they can’t get a licence for a commercial software product, there are great opensource ones available that an internet search will quickly find. Lots of people, including ourselves, will use Excel as a drawing package to produce high level illustrations of a project schedule by filling cells in an appropriate colour something like the one below but it’s not enough. 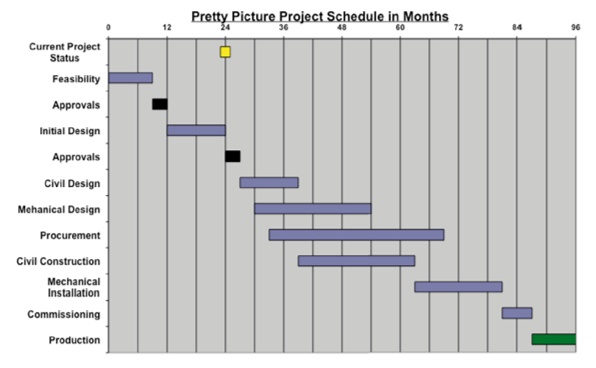 Why? Maybe you’re asking what’s wrong with this picture? As the Irish singer songwriter Van Morrison recognised in the lyrics of his 2003 song of the same title:

What we are not seeing in ‘the picture’ is the logic between the activities or tasks; what is really driving the project’s end date. What’s not clear is where there is total or free float (or slack).

The project manager cannot make any decisions about where to deploy scarce resource, or where to pay particular attention from this illustration. Even worse if anything changes on the project, activities slip or extend, or more work is added then the picture has to be redrawn in order to refl ect the changes.

As a high level communication device this picture is fine but as a working schedule through which to manage the project, it is useless.

We really hoped that after our previous Lucid Thoughts on this subject we wouldn’t need to write another one. We did, because we truly cannot believe that Microsoft Project would see it as a great new feature to turn off the logic that was the whole reason for the product in the fi rst place.

We are very concerned that this feature will cause the quality of project schedules to deteriorate even further. We totally understand and support that in the right experienced hands such a feature could be used with some benefi t but to many (too many) it will be like a dream come true. No logic required!

So to finish, one of our favourite sayings of all time. “A fool with a tool is still a fool!” Whilst we think the saying is funny, the issue isn’t. Our country invests billions every year in projects that rely on project managers knowing how to plan and control in its widest sense with ‘proper’ scheduling being a fundamental part of that.

Let’s do our bit to make sure that project managers know how to schedule their project and ensure that the value desired from the investment has a chance of being delivered.