Don't throw the baby out with the bathwater

In Forget the silver bullets, I write about the fact that there is a tendency to look for silver bullet solutions to the all too frequent failures of project management. 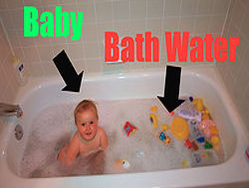 When silver bullets don’t work there is a negative reaction against them. Unfortunately this is sometimes quite extreme and the solution in question becomes treated as a cause of failure as opposed to a solution that hasn’t been applied properly.

One example that vividly illustrates this is the question of knowledge based qualifications such as PMP®, APMP and PRINCE2 Practitioner.

In the late 1990’s there was definitely an upsurge in popularity of these qualifications. Much of it was driven by the recruitment industry that needed simple badges for use in initial candidate selection. Many people sought to gain the qualifications to improve their CVs. The tipping point came when it ceased to be an advantage to have them on your CV but became a disadvantage not to have them. That’s when they became commodity products and really took off.

This kept the recruiters happy, but those responsible for projects soon realised that there was a tendency to think “have qualification will manage” and that wasn’t working. Why this came as a surprise I don’t know. The likes of APMP etc. are similar in academic level to GCSEs* and while I have ‘O’ levels (that’s GCSEs in old money) in chemistry and French I am neither a chemist nor a linguist. Why would an APMP make me a project manager?

The fact that I am neither a competent chemist nor linguist is no reflection on the value of the corresponding GCSEs. It just means that I chose a different path for higher education and experience. My inability to hold a conversation in French is not a reason to discard French GCSE.

The objections to APMP, PMP®, PRINCE2 Practitioner etc. are, in some quarters, lurid bordering on the fanatic. Commentators maintain they should be banned because they don’t create experienced project managers. Of course they don’t, they were never meant to, any more than GCSE Chemistry makes someone a chemist.

So to all those naysayers, please stop babbling on about the inadequacy of knowledge based qualifications. What we should all be doing is ensuring that they are understood for what they are, and more importantly, making sure that the rest of the stepping stones are in place to get from an APMP all the way through to Registered Project Professional (RPP).

Stop trying to throw the baby out with the bathwater**

* for international readers, the General Certificate of Secondary Education (GCSE) is a qualification taken by 16 year olds in England and Wales.

** the origins of this English idiom is from many years ago when families would all use the same bathwater. The Father would be first, followed by the Mother and then the children. The baby of the family would be last, by which time the bathwater was murky and ready to be thrown out. The saying refers to any situation where something of value is discarded in the haste to dispose of the 'dirty water'.

Don't throw the baby out with the bathwater