The human side of business case management

Some years ago I was responsible for a programme of strategic information systems development projects for a life insurance and pensions company. There were about ten projects in the programme, and I was also project manager for several of them.

Each project began with a full feasibility study, the findings of which had to win board approval before the project could proceed. 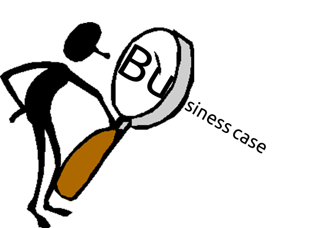 One project was designed to improve our relationship with our customers, by printing 'investment portfolio statements' instead of individual policy reports. Some customers had complained that it seemed inefficient to post up to 200 separate sets of documents to the same policyholder on the same day; surely we could merge the information onto one piece of paper?

Technically it was possible, although messy. In the feasibility study, we looked at several ways of achieving the objectives and developed a cost/benefit analysis for each option.

The costs were fairly easy to calculate, as they consisted mostly of applying fixes to the policy systems, and writing a new set of print routines.

The savings were interesting, in that there were huge staff savings in paper handling, filing and dispatch, as well as some small savings in printing costs, computer time and storage costs.

In simple terms, our staff savings were about £300,000 per annum, against a development budget of £400,000. This looked like a payback in less than 18 months, so the board ought to give approval without too much hassle.

However, my boss had a brainwave just as we were putting the finishing touches to the cost/benefit analysis. “We must be saving a lot of money in stamps”, he said; “I'll go and find out how much we can save”.

He spent a happy few hours down in the post room with the supervisor and they established that, with our proposed method of merging the information on many sheets down onto one statement, we could save £600 per year in postage.

He was thrilled at this extra saving, and insisted that it should be incorporated into the analysis.

Unfortunately, this £600 per year almost sunk our proposals. It looked (and was) accurate, whereas our highly researched £300,000 now looked like an off-the-ceiling guess. The board refused to take it at face value, and wanted to go through all the working papers. Eventually they (somewhat reluctantly, I felt) approved the proposals, and the project got under way.

I wish we'd never bothered with the £600. We certainly didn't need it for cost justification purposes, as our £300,000 easily won the payback argument, and the £600 threw the rest of the analysis into doubt.

A better approach might have been to simply list the 'savings on postage' as an unquantified benefit below the line (i.e. out of the financial analysis), alongside such benefits as improved corporate image and enhanced customer service. It would have looked good (we had obviously considered every angle), but would not have highlighted the other quantified savings in such a damaging way.

It might seem a little strange not to claim every possible penny, but when the overall case was so strong we should have afforded ourselves a little flexibility in our approach.

The lesson I learned from this experience was to try to make cost/benefit analyses not just technically complete and correct but also 'sensible' in their presentation. By their very nature they are being read and scrutinised by sceptics, so the presentation is just as important as the financial content.

The human side of business case management