I know that some people prefer Keep It Super Simple or Keep It Simple, Sweetie. But the former doesn’t excite me because there is such a thing as too simple, and with the latter, I think we’re just trading one form of political incorrectness for another. So I’ll stick with the original. 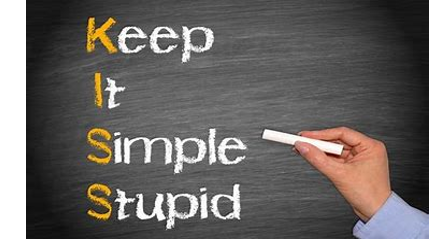 I am a true believer in the value of Earned Value. A fanatic even. I have never seen a better way of tracking project progress. Yet I find many project managers scared of EV because they have only been told about the advanced version. This would be like starting a spelling lesson with enough or supercalifragilisticexpialidocious instead of cat and hat.

And if you learned about EV in a certification exam preparation course, you probably learned all the things that it can’t do. This would be like having your high school driver’s education teacher spending most of the course discussing how the family sedan is unable to achieve lift-off velocity or drive underwater.

So let’s start with the basics. For each detail item (activity, task, work package, whatever) on your project, EV requires three pieces of information:

And we want to compare those figures:

For example, you can develop your plan using staff hours, money, or whatever units make sense. You can schedule each detail item, and then compute cumulative values and variances for the project to complement the detail data. You can determine progress in many different ways. You can use ratios to forecast future performance.

But master the basics first. Keep It Simple, Stupid.