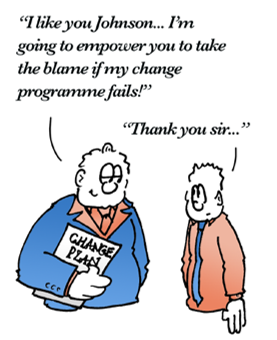 Empowerment has been a popular concept in management for a number of years. It is supposed to release the energy and enthusiasm of the organisation. It feels like a ‘nice’ thing – to empower someone else – and to be empowered. It suggests liberation, autonomy and choice. The assumption also is that it works.

In this Lucid Thought we suggest that the realisation of planned change through programmes and projects, rather than relying on empowerment, actually relies on a disempowerment of the people doing the work. Is this appropriate in human terms? Does it work in terms of realising benefits from planned change? These are big questions. Here’s what we’re thinking.

We start with one of the more famous sets of ideas on what it takes to bring about transformational change; the work of the prominent Harvard Business School professor John Kotter.

In a nutshell, Kotter suggests that given a sense of urgency and the formation of a strong coalition, formed around an appealing vision that is compellingly communicated, leaders should empower others to act on the vision. Projects should be planned to bring about change, and then leaders need to consolidate changes so institutionalising new approaches. If people in this scenario are required to act on the vision of the managerial coalition then the verb “to empower” seems like the wrong one. “To delegate”, or “to assign”, might be more accurate. Given that people are not asked to act upon their own vision, they are surely not empowered.

The advice about how to bring about planned change is actually predicated on the existence of managerial authority, and the presumption that the vision for the change is in the interests of the organisation. Without managerial authority change would happen, but on a more evolutionary, haphazard and uncertain basis. Individuals who truly felt empowered would be free to choose to do things or not, to promote one vision or oppose another. They would decide how best to proceed and at what pace, who to involve and when to rethink and revise plans and actions.

Projects and programmes enable planned change by disempowering individuals in organisations. An objective focuses attention on one goal or outcome at the exclusion of other perceived goals and priorities. Statements of scope de-limit the sphere of interest and create boundaries. Plans prescribe actions, the expected rate of progress, the people (resources) involved, the work process and sequence of tasks. Individuals are assigned roles and responsibilities. Control mechanisms spotlight non-performance and exert discipline. Projects and programmes channel efforts and facilitate the exercise of direct managerial authority.

This says to us that to bring about change that enables organisations to stay competitive or relevant, we need to suspend empowerment, supposedly for the greater good. If we can align interests and goals, then delegated authority through the chain of command becomes the same as empowerment. Neat if we pull it off. Do we ever?

So why do we keep on talking about empowerment if we don’t really mean it? Perhaps we are just trying to soften the implied coercion that comes with managerial authority by ‘pretending’ that we all share a vision of order, efficiency and predictability. If there is any truth in this idea then we should pay attention to the ethical and moral dimensions of bring about planned change, with its benefits and dis-benefits to a multitude of stakeholders.

As programme and project managers we often present ourselves as rational executors of mandated initiatives, choosing to believe that in the long run we act in the best interests of everyone involved. We should do this consciously, aware of the dilemmas and contradictions in this approach, and so prevent ourselves falling into the dangerous trap of believing that ‘management’ always works.

We have lots of examples of management not working in our society over recent years. An unthinking belief that ‘management’ always works can lead us to being blind to injustices and to a view that we can design for others what’s best for them. Let’s not slip into a collusion with those who claim, and would ruthlessly exercise, managerial authority. Rather, as change agents and professionals, we have a duty of care to all stakeholders.