This is the second of three articles on effort estimating. In the first, I focused on definitions since I find that many people use terms such as estimate and budget as synonyms when, in fact, they are very different. Here is a brief recap of the key definitions: 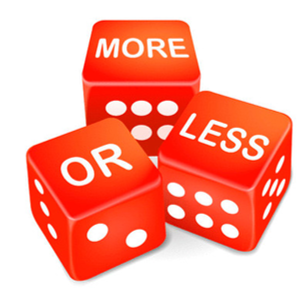 Estimate. An informed assessment of an uncertain event. Informed means that you have an identified basis for the estimate. Uncertain recognizes that multiple outcomes are possible.

Effort. An expenditure of physical or mental effort on the part of a project team member. Effort is normally measured in terms of person hours.

Budget. A management metric that is usually derived from the estimate of the relevant work.

Baseline. A time-phased budget that has received all necessary approvals.

Let’s start with a simple example to build a conceptual foundation. Later, we’ll use these concepts to help deal with more difficult effort estimating challenges.

It may seem obvious, but the first requirement for developing an effort estimate is to know what you are estimating. For now, let’s assume that you have been asked to estimate how much effort (how much of your own time) is likely to be required to paint your bedroom.

Although this is a fairly small activity, it is still one with a significant amount of uncertainty:

If you don’t know the answers to these questions, you have a five basic choices. You can:

Any of these approaches is acceptable as long as your stakeholders know which approach you are using.

Most of the time, you will use some combination of these options. You will make some reasonable assumptions (and you will always document all of your assumptions). You will ask some questions. Then you will apply your best judgment.

You can improve your best judgment by making range estimates. How does a range estimate work? In its simplest form, you estimate a low value and a high value for the amount of effort that you think you are likely to need. For example, in the case of painting your bedroom, and assuming that the scope is limited to applying one coat of paint to the walls, you might estimate 2-3 hours of effort.

[Note that we are only talking about effort here, not duration or elapsed time. Those 2-3 hours might be done continuously, or might be spread out over a couple of days or even weeks. Nor are we yet addressing costs or prices.]

In fact, even when the actual result falls outside of your estimate's range, you still made a good estimate since it was the best estimate that you could make given what you knew at the time. In addition, you can learn from this estimate variance (an estimate variance is an actual result that falls outside the predicted range; it's not the same as a budget variance) and use that learning to try to improve your future effort estimates.

Using range estimates takes much of the pain out of the effort estimating process. If you are accustomed to single point estimates (see below), it can be very difficult to choose between 2 hours and 3 hours. Even quoting an estimate of 2.5 hours can be gut-wrenching because you know that it might take more or less than that amount. Using range estimates allows you to operate under uncertainty.

Boss: "How long will it take to paint that room?"
You: "We have estimated 2-3 hours of effort for one coat of paint."
Boss: "I need one number to get approval."
You: "We’re planning to budget 2.75 hours of effort to be on the safe side."

You can improve your judgment still further by making three-point range estimates. In addition to the high and low values of a simple range estimate, you add an assessment of the most likely in-between result.

Let’s say, for example, that you are living in the world of Groundhog Day such that you can paint your room 100 times and keep records of how much effort it actually took. You discover that you never spent less than 2 hours and never more than 3. You also discover that your actual results produced a triangular distribution with a peak at 2.3 hours.

Based on the availability of this actual, historical information, you would estimate the amount of effort required to paint a similarly sized bedroom as follows: 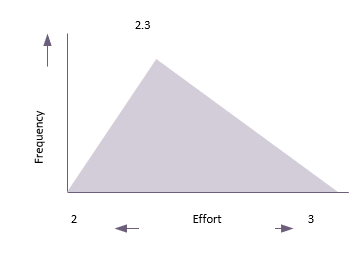 I understand that you will seldom if ever have such wonderful, perfect historical information to base your estimates on, but the great thing about range estimating is that you don’t need perfect data. As long as the three-point range estimate is reasonable, errors are likely to balance out over the course of the project.

Even in this case, with perfect data, you still don’t know how exactly how much effort will be required for the next time you paint your bedroom. It might be 2.5 hours; it might be 3.75 hours. Doesn’t matter. What is important is that you have estimates that are reasonable; that you have estimates that will allow you to manage the project effectively.

The mechanics of preparing three-point range estimates, particularly if you are working with team members who have never used the technique before, are important.

Working one-on-one. Let’s again start with a simple case where you need an effort estimate from an individual team member regarding how much of their effort is likely to be required to complete a specific activity. The first step is to make certain that both of you have a common understanding of words like “estimate” and “result.” Do your best to keep your language consistent, even if you feel a little awkward.

Begin the discussion with a review of the work to be done to ensure that both you and your team member have a common understanding of the work. If there are unknowns, decide how to handle them - make assumptions, go get answers, whatever.

Once you have a reasonable level of agreement, ask the individual for their effort estimate of the most likely result. I tend to use words like, “if these assumptions turn out to be true, how much of your time do you think this work is likely to take?” After they’ve answered that question, I ask, “if every thing goes well, if you get very lucky with this activity, and still using the same assumptions, how much of your effort do you think this activity will take?” Then I use similar language to obtain a pessimistic effort estimate.

Understand that the first few conversations with any given individual are unlikely to go smoothly. They may generate additional questions or ask you to make additional assumptions at any point during the conversation. Fine. Let them. Help them climb the learning curve.

My experience is that it takes most people 3-5 iterations to get comfortable with the process. After that, they’ll start giving you three-point effort estimates automatically.

Feel free to challenge their effort estimates, but do so constructively by asking clarifying questions. Do not cast aspersions on their estimates. If the two of you differ, the most likely explanation is that your understanding of the work differs. Concentrate on identifying and resolving those differences.

It also seems to be important to start by asking for the most likely result, then the optimistic, and then the pessimistic. I don’t know why, but this sequence seems to work best.

Working with a group. Most of your estimates will not be developed one-on-one, but rather will be developed by small groups as part of a team planning process. The basic process remains the same for these small groups:

Even when some of the group members don’t have deep expertise in the project’s work, their presence can help to surface unstated assumptions and to build team-wide commitment to and understanding of the effort estimates.

I am convinced that the thinking process and the conversations that support three-point range estimating contribute to the development of more accurate effort estimates. Short-circuiting the process may appear to save time, but this is a false economy.

My experience is that developing three-point range estimates of effort almost always takes less time than developing single-point estimates because the process eliminates the posturing and gamesmanship that often delays the estimating process. I’ve had teams in my project management training courses spend less than an hour to develop an estimate for a 4,000 hour project - an estimate that later proved highly accurate.

A recent client spent less than a day to discover that a mission-critical, multi-million dollar new product development project was going to be eight months late. An investment of something less than $10,000 is expected to return in excess of $10,000,000. Time spent estimating is not a cost, it is cheap insurance.

In the last article of this series, I’ll cover some of the more difficult challenges of effort estimating on projects: what to do when management thinks it should take less, using range estimates with project management software, how to deal with the natural (and normal) biases of the estimators, and how to use some basic, simple statistical methods to create an effort estimate for the whole project.