Where conflict shouldn't end up

When preparing for a tricky situation involving people, we would wish to prepare ourselves as best we can, in order to bring about a satisfactory conclusion. However, I had a salutary lesson a couple of years ago about just how to prepare, and the advice I was given was simple and effective. Unfortunately, it came too late for me and the skilled project resource I was dealing with.

I took over an IT development project when the original project manager took long-term sick leave. The project was deep into the coding and testing stage, with a large team of developers on board.

The day-to-day technical management of the team was handled by a senior programmer, who had been with the project since inception, and who knew the individuals very well (indeed, he had selected most of them himself).

As I took over, the customer submitted a far-reaching change request which just had to be included in our development. It would involve a major rethink of how we were going to use the resources, and I foresaw a potential conflict between me and the senior programmer. I had been warned that he was angry that he didn't get the project manager job when it fell vacant, but I had strong backing from senior management that I was the correct choice.

I planned how I was going to approach a meeting with the senior programmer. I identified my objectives, where I thought he might be coming from, and therefore my way of achieving the objectives. I made myself very familiar with the project plans, both original and suggested plans, and felt ready.

The meeting began. I started to describe the business need behind the proposed changes, but things got heated. A large amount of work would have to be scrapped, and he didn't like it.

Unfortunately, we quickly entered the conflict stage of the discussion. Tempers got frayed, and we ricocheted between raised voices and sullen silences. I tried to get back to my objectives, but things were getting out of hand. 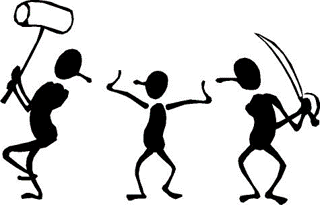 The meeting got very heated.

Before I knew it, I had lost control of the meeting, and eventually the senior programmer jumped to his feet and said "If you're so clever, you sort it out, I'm out of here. I've had enough of this job, anyway, and it's about time I moved to somewhere where they would really appreciate my efforts", and he stormed out, slamming my office door on his way.

This was definitely not part of my plan. I needed this highly skilled technician to help us through the replanning, and I had raced through the meeting right down to the ending I didn't want. What a mess.
Well, as it turned out he came back in quite quickly, and apologised for his behaviour. He blamed it on not sleeping well because of a new baby. His inter-personal skills were so much better than mine that he rescued the situation, and we ended up with him taking the challenge away to 'sort it out'.

I got through this second round with my heart racing and a feeling of gratitude towards my protagonist. When my boss came in a few minutes later I was obviously still stunned by how badly I'd handled it all, and he offered me some advice that I have tried to remember and use ever since.

He said that most conflict management training talks about having clear objectives, listening to the other person's point of view, and constructing a solution from both parties' needs. He said they never tell you the most useful thing, which is to make sure you identify in advance just where you DON'T want to end up, and you steer the situation away from it, calling a break if necessary. If you don't know where you mustn't go, then, he said, you'll go straight there, and you won't be able to get back.

Wise advice, and so useful. I've actually used it now on both sides of conflict situations, where I've been trying to sort something out and where I've been the source of the conflict! Sometimes I struggle to keep to it, but the clear image of a nasty ending is a great thing to keep in mind when the temperature starts to rise.

Where conflict shouldn't end up