Float, is it real?

The concept of ‘float’ is less than 60 years old. The existence of a critical path and non-critical activities (with their associated ‘float’) grew out of the science of scheduling as defined by Critical Path Analysis (CPA) developed in 1957 by Kelly and Walker. Before this time, Bar Charts, milestones and industrial processes such as ‘line of balance' were used to control projects. The key question posed by this post is if schedule float did not exist before 1957, how real is it today? 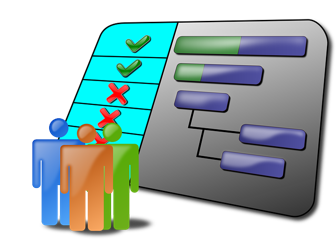 The tasks used to create the schedule are variable (different planners can/will choose different patterns of tasks to describe the same work), as are the allocated durations (based on presumed resources) and the interconnecting logic. Develop a ‘logic network’ using different assumptions and you generate different float values and a different ‘critical path’. Which option is real?

The finished schedule may look ‘logical’ and may represent the best intentions of the project team at the time it was developed, but it is not a vision of the actual future for the project (this cannot be foreseen). The schedule is only a presumed future that may happen if everyone works towards achieving the plan, and almost certainly won’t happen exactly as planned. Every deviation from the plan changes the float calculations!

Float is also ephemeral. The passage of time will of itself destroy ‘float’ – float can only exist in the future, it cannot be stored and it cannot be recovered from past activities.

And finally any changes that occur during the execution of the project that require changes in the project plan will frequently have dramatic effects on the location and amount of float in the overall schedule.

The calculations that create the concept of float are precise and are typically processed in a computer.

Probability theory reminds us that combining uncertainties reduces the probability of the output by the combined factors of the input. Float is precisely calculated in computer algorithms – the computer does not add to the uncertainty, but is based on the combination of a series of uncertain assumptions, and therefore remains uncertain, and importantly we never know how uncertain until after the project is finished!

Unfortunately, the mathematical precision of critical path scheduling has caught the attention of lawyers and contract draftsmen leading to the evolving concept of the ‘contract program’ that confers a degree of legal certainty onto the schedule that cannot be supported by objective analysis.

This approach has created the concept of ‘the contract program’, that can only be changed by agreement (if at all), and the assumption that only delays impacting the ‘critical path’ can give rise to extensions of time, delay costs, etc. Unfortunately lawyers are no better at predicting and controlling the future than planners. All this type of ridged contract clause does is create a static means of measuring failure. The only beneficiaries are the lawyers and consultants who get paid to fight over claims made after the event. Everyone loses!

Fortunately accurate and useful are not synonymous. CPA is an extremely useful way of gaining insight to the essence of a project and when used properly can help to define an agreed way of working to achieve the project’s objectives, which in turn can help motivate and direct the project team. However, CPA is not an accurate or fool proof determinant of ‘the future’ regardless of the terms and conditions written into a contract. And as discussed above, every schedule is a creation of assumptions and presumptions crafted (with greater or lesser skills) by a planner and influenced by the algorithms built into the software used for analysis. A paradigm shift in thinking is needed!!

Recognising that ‘planning’ is a highly skilled, but imprecise art (supported by science) opens up a range of opportunities. Effective planning, based on this recognition, requires a willingness to continually monitor and adapt the schedule to make sure it represents the ‘best’ way forward based on the team’s current knowledge of the project supported by a cooperative approach to problem solving. Collaborating in the proactive management of the use of time is the best way to achieve the optimum project outcome that benefits the client and the contractor.

The ability to implement this collaborative approach requires a framework, a new form of contract and skilled ‘time managers’. The Chartered Institute of Building (CIOB) have embarked on a mission to deliver all three components supported by a ‘management education program’. The framework exists; a new form of contract is open for public review and training courses and credentials are under development.

Now to answer the question posed at the beginning: Is float real? Lawyers and people who believe in the perfect ‘contract program’ certainly believe float is real. My view is float is a useful fiction! It is no more real than gravity, but in exactly the same way the Newtonian concept of gravity is useful for many things, the concept of float is useful in the management of projects. Ideas don’t have to be real to be useful!

Float, is it real?