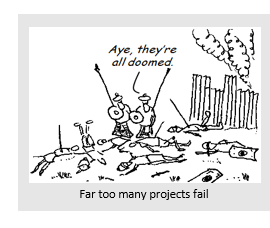 Project management, in the modern sense, has been with us a long time now. Some people have spent most, if not all their careers engaged in it in one form or another. Research and anecdotal evidence, however, seems to indicate that we still don’t 'get it'. Reports continue to be written on 'causes of project failure'. Eminent committees are set up to 'get to the root of the problem', international and national standards are created and yet:

Why is this? If I could answer that, then I would be able to charge massive consulting fees! The question is rather like that posed in Hitch-hikers guide to the galaxy asking, “What is the meaning of life?”  As we all know, the answer is “42” – which doesn’t help us one jot. If I ever came across anyone who knew the solution to stopping project failure, I would be very sceptical.

So why can’t people grasp the significance and advantages of business-led project management? We have: 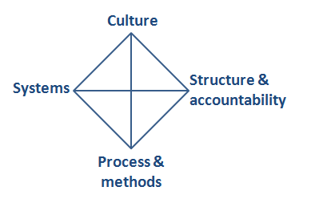 We need to cover all four bases. Having good methods and process supported by good tools and systems with clear accountabilities is necessary but not enough. The critical difference comes from an organisation’s culture; how they behave and their values. Give me the right culture and mediocre process over poor culture and brilliant process, any day. Organisations where project management 'doesn’t work', are likely to have a culture which actively prevents it from working. For example, for project management to be effective, we need more than just good project managers; for example:

Hunter Thompson, in 1970, said “In a democracy, people usually get the kind of government they deserve and they deserve what they get.” In this he blames the people in a democracy. Organisations, however are not democracies and so I would turn that quotation on its head:

“Senior teams get the project management performance they deserve“.

The CEO sets the culture and “the way they want to run their business” and the following list indicates where the culture and values promote failure, rather than success. Running a project is difficult enough, but we often make it more arduous than it need be by creating problems for ourselves. Here are a few examples:

I’m sure you can add to that list, so please do, by adding a comment. Over the next few months, I’ll investigate a number of the above symptoms.